Award for the Vegeta Grill products 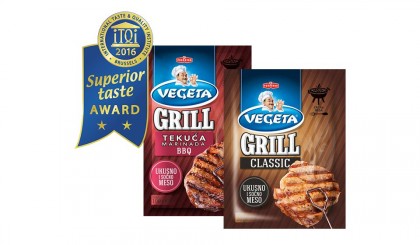 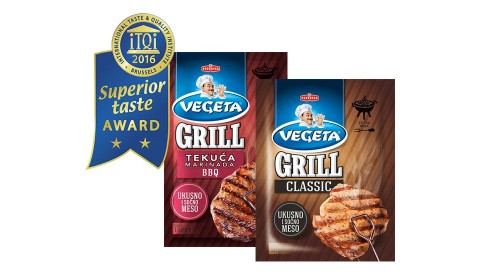 Among many competitors in the food and beverage category, the expert panel recognised the exceptional quality of the Vegeta Grill products:

Out of 27 registered products, as many as 23 Podravka products received this award, which confirms the excellence of taste in categories they were competing. To date, a number of Podravka products have won the Superior Taste award, though this is a record-breaking year for the number of individual awards (23) and for the special award for Podravka Lemon-Lime Tea, which has received the highest grade of 3 STA stars for three years in a row by 3 different panels, granting it special status and the Crystal Taste Award. Be sure to try Podravka Lemon-Lime tea, either as a hot or cold beverage, and see for yourself that its excellent taste is perfect for summer or winter.

Apart from this, Superior Taste Award was given this year among others to

The Superior Taste Award is granted by the International Taste & Quality Institute – iTQi – the world's leading organisation dedicated to the tasting and promotion of superior products from the food and beverage sector. Companies from more than 120 countries compete for this prestigious award.

Winners are selected by a panel of judges from 15 prestigious European culinary associations and sommelier associations. The assessment process is rigorous, and includes sensory evaluation by blind test method, where, among others a special emphasis is given to evaluation of taste, aroma, texture and product appearance.

The jury is comprised of renowned European chefs and sommeliers from culinary institutions, Namely, when in 2008 Podravka participated for the first on this competition, and up until today more than 70 Podravka products climbed to the top of this culinary scale, which with their tastes, flavours and design daily attract consumers in more than 40 countries around the world.

This website uses cookies in order to provide better user experience and functionality. By continuing to browse the site you agree to our use of cookies.